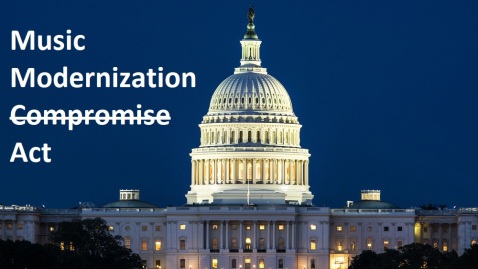 Today, the Music Modernization Act has passed the U.S. House of Representatives with a unanimous 415 – 0 vote (16 reps abstained from voting at all).

The mega bill — which consists of a bundle of Titles that were previously independently proposed bills — will change the way in which musical works are licensed by digital service providers and provide a safe harbor for infringement under a blanket licensing mechanism (Title One – Musical Works Modernization Act); it will bring recordings made before 1972 under federal copyright protection (Title Two – Compensating Legacy Artists for their Songs, Service, and Important Contributions to Society Act or CLASSICS Act); and it will codify an allocation of digital radio royalties to music producers and sound engineers (Title Three – Allocation for Music Producers Act or AMP Act).

On its surface the MMA sounds amazing, when summarized this way.

Accordingly, the passing of the MMA in the House was widely praised by executives from the most recognizable U.S. music rights organizations and trade associations (e.g. NMPA, RIAA, DiMA).

However, there remains many uncertainties in the language of the bill presenting an opportunity for the Senate to course correct before the bill becomes a law that would take over 20 years to improve, again (the Digital Millennium Copyright Act was the last piece of legislation impacting the music business — it was enacted in 1998).

Also read: I Was Interviewed By The Congressional Budget Office Regarding The Music Modernization Act, And Now I’m Even More Concerned For DIY Musicians

So, what could the Senate do to make the bill more fair to the tens of thousands of music creators who are not represented (or underrepresented) by the industry sponsors of this bill? Well, there’s at least five issues that can be addressed immediately:

How else could the MMA be improved? Or do you feel that it is fair enough? Let’s discuss in the comments.