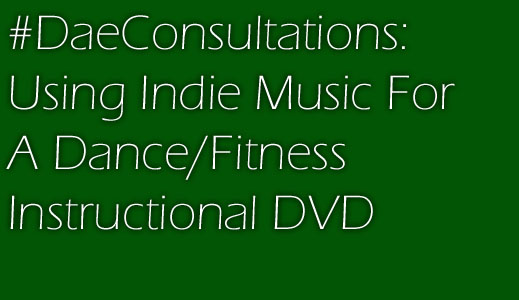 Up early this Monday morning conducting a small consultation via Facebook messenger for an indie artist/choreographer. I know A LOT of dancer/choreographers, so this is the 4th time I’ve received this kind of inquiry. Therefore, I’m going to share it.

Inquiry: I’ve been thinking about creating a Dance/Fitness DVD for quite sometime now, doing a little research. But my main road block is finding the right music that I can gain the permission to use. And I think it boils down to me finding the right legal document template to guide me.

I do plan on selling the DVDs & I’m thinking of getting permission from indie artists whose songs I like & those who don’t mind just getting the exposure. For a past project I improvised my own Media Release & Content Form to use the artist’s likeness etc. But I’m just not sure what I should use to cover all mine & their legal bases for something like this. I’d like something simple & to the point, yet thorough. Any ideas or suggestions??

Consultation: When using music for a DVD, you’d need to get two licenses from the rights owners. The first is a synchronization license which covers permission to synch the musical composition to motion graphics (video). This should be signed by the song publisher. The second is a master use license which covers permission to perform the sound recording in the video. This should come from the owner of the sound recording (typically, the record company). If it’s an independent artist who owns 100% of the publishing (has no publishing deal) and 100% of the masters (has no record deal), then they can sign both documents.

The agreement should spell out how much of the song will be used and how, how they will be compensated (which can be a percentage of sales of the DVD with no upfront advance). You also need to spell out the term of the deal and the territory (which should be in perpetuity and worldwide). You should seek an attorney for more details and a proper license agreement document.

Let me know if you have any other questions!

The inquirer followed up with additional questions which I’ve posted below with my response:

QUESTION: So I guess my next question is, what if an artist doesn’t exclusively own the track etc they recorded to? Is there even a way for me to prove that if I’m just taking their word? Wouldn’t they be responsible if they signed anyway? It can get kind of messy when trying to track down all parties involved from production to writing etc.

MY RESPONSE: In regards to trying to figure out if the song is really 100% owned by the artist or not can be difficult if it is not registered with ASCAP, BMI or SESAC. If the song IS registered, then you can find out who are the publishing rights owners by using ASCAP ACE search: https://www.ascap.com/Home/ace-title-search/index.aspx (BMI and SESAC offer a similar online search tool).

When you track down any song (by Title, Song, Writer, Performer), you will see who all the writers are and all the publishers. If there are several, you need permission from ALL of them (unless only one publisher was granted sole administration rights).

Also, if the song is not registered, then you can only go by the artist word. One thing you should know is that in most cases there is always at least two writers: the PRODUCER and the ARTIST. So, even if it isn’t registered, you’d need to get permission from the producer unless the artist has an agreement between him and the producer that the production was done on a “works made for hire” basis, which gives the artist 100% copyright ownership in the song (ask to see this agreement and make a copy for your records).

QUESTION: So the initial question is do they own the material? If they say, no I don’t but this person does own this…I need to then go down the ladder of contacting the next person in action? Do I even need to ask for documentation on their behalf, or just deal with my own?

MY RESPONSE: You need to have your own docs (so that you set the terms and protect your interests). They simply need to sign the docs (although they may attempt to negotiate the terms).

There isn’t a legitimate way to see who the owner of the master sound recording is of a song. The only work around is to look at the copyright details on the iTunes (or similar digital music retail website) page. If the copyright is anyone other than (or in addition to) the artist, then you’d need their permission.

Step 3: Once you know the writer(s) are, they all need to sign the synchronization agreement.

Considerations: If there are multiple writers (note that a “producer” is considered a writer in the publishing world), then each of them must sign. If any of them have a publisher, then the publisher must sign (not the writer).

Considerations: The artist, producer, production company or independent label could partially or wholly own the sound recording (even in the event the songwriter owns 100% of the publishing).