#IndieMusicStories: Fighting For Your Copyrights When A Sweet Oral Agreement Goes Sour 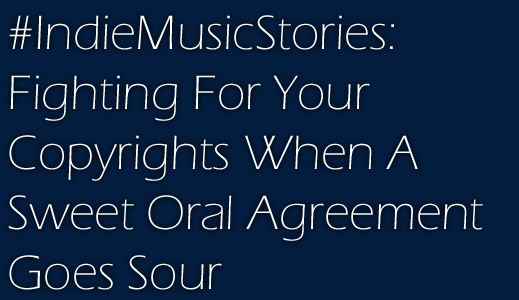 Preface: Every day I receive emails, phone calls, text messages and social media pings from indie artists, bands, music producers and artist managers seeking advice on their music career or insight into the music industry in general. In addition, after speaking on panels, teaching workshops or guest lecturing at music production schools I participate in Q&A sessions that yield all kinds of questions. Often, the advice sought is due to some very specific recent incident in their music career pursuits. I’ve created this series to offer a glimpse into the indie music community–the good, the bad and the ugly. These are their stories; the #IndieMusicStories. [All names are fictional. I’ve changed the names of the real person to protect his/her identity.]

Kelly is an independent pop artist who has been generating buzz in her hometown in New Mexico for a few years. She has performed spot dates across the US and is ready to take her career to the next level. She has been offered a publishing deal, but can’t move forward until she settles a dispute that’s holding her back: Kelly is $30,000 in the whole and fighting for the copyright ownership of the song and master for 3 of the tracks on her upcoming album.

Kelly connected with a producer in Los Angeles to work on several songs. She paid the producer $30,000 to produce, co-write, mix and master 3 songs on a work made for hire basis. The producer produced and wrote 1 song and produced and co-wrote 2 songs.

Kelly says she and the producer had an oral agreement for this work made for hire arrangement, but neither drew-up a producer agreement before getting started on making music.

Recently, the producer presented Kelly with an agreement that names the producer as the sole copyright owner in the songs and only gives Kelly a compulsory mechanical license to use the songs for her album.

Further, the producer agreement stipulates that the funds Kelly has paid so far are nothing more than an advance on the compulsory mechanical royalties that would be due for the use of the songs and that he will not turn over the session files or masters unless she signs the producer agreement.

Kelly has a publishing deal pending but cannot accept it until this situation gets cleared up. A publishing agreement with any publisher would require Kelly to assign (or transfer) a portion of the publishing ownership in the songs to the publisher; which according to the producer, Kelly does not own.

As I do before giving advice to anyone, I explained to Kelly that I am not an attorney and cannot provide her with legal advice. However, I am willing to give her some basic guidance based on my knowledge, experience and the details of her situation.

My advise to Kelly is to first try to negotiate a favorable deal with the producer. Although he may be a sleaze and unethical d-bag to have committed to a work made for hire arrangement then renege, it may be less of a hassle (and less expensive) then taking him to court. Also, if her publishing deal offer is timely, settling quickly can get her started on the next level of her career.

However, if it doesn’t seem like the producer is willing to have integrity and stick to their original work made for hire arrangement, she may have two factors that offer hope.

The first factor is the nature of her agreement.

If Kelly were to sue the producer for sole copyright ownership and recovery of related materials (session files and masters), she would be in a better position if she had witnesses, email exchanges or text messages between her and the producer that proves that they both had an understanding on the work made for hire arrangement.

The second factor is related to the master sound recording and precisely the fact that they did not have a written agreement.

The producer maintains that he is the sole owner in the copyrights of the song and the master sound recording. In this relationship, Kelly would be considered a recording artist performing music owned by the copyright owner (in this case, the producer).

However, the producer does not have a signed recording agreement between the artist (Kelly) and the label (producer) which would allow him to commercially exploit the master sound recording. That is, he can not market, distribute, or sale copies of the song.

It is easier for the producer to maintain that he owns 100% copyright in the songs that he wrote and produced because the creative works of authors is deemed copyrighted the moment it is fixed in a tangible means such as written or typed (lyrics) or recorded (music). Since the producer did in fact produce and write the songs (and Kelly performed them), he is technically the author. And in the absence of a work made for hire producer agreement, Kelly has not secured assignment of copyrights on paper (only verbally).

However, the master sound recording is another copyright altogether that is substantiated by the fact that the copyright owner has an agreement (such as a recording agreement) with the creators of any sounds captured within the recording (such as a vocalist).

So, while Kelly may have to determine which route she’ll take to come to some closure on this situation (negotiation or legal action), she needs not worry if the master sound recording will be exploited without her being among the beneficiaries.

In conclusion, this story is a token story in the music world. Excited artists and producers jump into collaborations without conducting the proper due diligence.

Sometimes, indie artists have little expectation on how “big” a record will become (in terms of exposure and sales), so they don’t think it’s necessary (or can’t afford) to get an attorney involved to protect their interest.

I always advise artists and producers to get your terms in writing before starting a project. At least have a split sheet completed before the work is completed and definitely before the exchange of money.

Even in the absence of an attorney, some paperwork is better than no paperwork at all.

DISCLAIMER: The information contained herein is for informational purposes only as a service to the public, and is not legal advice or a substitute for legal counsel, nor does it constitute advertising of legal services or a solicitation of legal business.