As MTP readers will recall, I prefer to think of Big Tech’s various safe harbors like the CDA, DMCA and now the MMA as an income transfer.  It’s not that the money isn’t getting made, it’s just not getting made by the people who created the value.

For example, when Google profits from selling ads against infringing videos, that money doesn’t disappear, it just doesn’t go to the artist.  So where does it go?

Well…according to a recent article in Modern Luxury “Men of Style,” it appears to go into Michael Beckerman’s shoes.  Michael Beckerman is the CEO of the Internet Association, Google’s main lobbying shillery in DC. 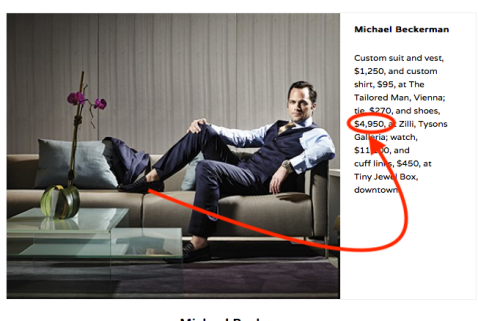 That’s right–$4,950 shoes.  But no socks.  Now that’s what I call an income transfer.  Looks like DMCA safe harbor on his feet, CDA for his watch–what will he buy himself as a reward for the MMA reachback?  Maybe a little poker in…

Dae Bogan is a music rights executive, serial entrepreneur, and educator with over fifteen years of experience in the music industry. Currently, he is the Head of Third-Party Partnerships at the Mechanical Licensing Collective and Lecturer at the UCLA Herb Alpert School of Music.
View all posts by Dae Bogan »
« Previous post
Next post »