Demystifying The Music Industry: What’s The Difference Between ASCAP/BMI/SESAC and SoundExchange? 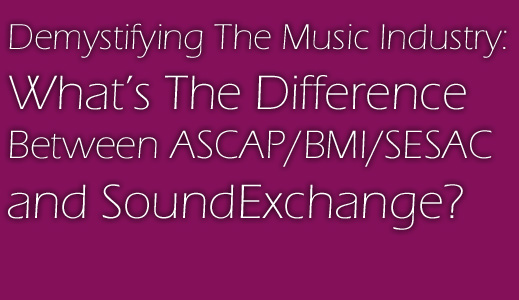 I received an email this morning from a reader who had read my piece, “Demystifying The Music Industry: What’s This About Public Performance Rights?.” He asked, “If SoundExchange was designated by the Library of Congress as the sole PRO to administer public performance licenses and also collect public performances fees for Sound Recording Company Owners, then why do artists still utilize the services provided by the other 3 US PROs (ASCAP / BMI / SESAC) – is [SoundExchange] not sufficient by itself?”

A lot of indie artists are confused about the difference between ASCAP, BMI, SESAC and SoundExchange. I’ll attempt to break down the most important differences between these groups and elaborate towards the end about other considerations and other royalty collection entities. Feel free to comment with any questions (or corrections).

ASCAP (American Society of Composers, Authors, and Publishers), BMI (Broadcast Music, Inc.) and SESAC are US public performance organizations (PROs) who collect royalties for the PUBLIC PERFORMANCE of musical works as stipulated by the U.S. Copyright Act. This includes fees paid by radio stations, businesses, restaurants, concert venues, bars, nightclubs, sports arenas, bowling alleys, malls and shopping centers, amusement parks, colleges & universities, etc. for performing music in the public (within the confines of their establishment). These monies are paid to ASCAP, BMI and SESAC for a blanket public performance license that grants the licensee (the business) permission to allow music to be performed in their environment (this includes music over speakers and music performed live by an artist). The license fees paid to ASCAP, BMI and SESAC are passed on to the copyright owners in the musical works (song) — PUBLISHERS (50%) and SONGWRITERS (50%) — as performance royalties for musical works.

SoundExchange is a US public performance organization (PRO) who collects royalties for DIGITAL PUBLIC PERFORMANCE of sound recordings stipulated by the Digital Performance Right in Sound Recording Act of 1995 and Digital Millennium Copyright Act of 1998. This includes fees paid by music service providers (MSPs) to stream music over satellite (SiriusXM), internet (Pandora, Spotify, iTunes Radio, Rdio, Rhapsody), cable (Music Choice, Verve) and other digital means as stipulated by law. These fees are paid to SoundExchange for a digital statutory license, under sections 112 and 114 of the Copyright Act, to stream sound recordings. The license fees paid to SoundExchange are passed on to copyright owners in the sound recording (master) — RECORD LABEL (50%), FEATURED ARTIST (45%), and NON-FEATURED ARTISTS (i.e. background vocalist, session musicians, etc.) (5%) — as digital statutory royalties for sound recordings.

There are lots of other sound recording royalties (besides the digital royalties collected by SoundExchange) that are collected on behalf of featured recording artists, non-featured artists (ie. background or session vocalists), instrumental musicians, etc. They include:

There are lots of other musical works royalties (besides the public performance royalties collected by ASCAP/BMI/SESAC) that are collected on behalf of songwriters, music producers and publishers:

And there’s more, but I’ll leave it at that. Any questions?

15 responses to “Demystifying The Music Industry: What’s The Difference Between ASCAP/BMI/SESAC and SoundExchange?”