Indie Music Is On The Rise…Or Is It? A Response From The GRAMMYs, Coachella and More 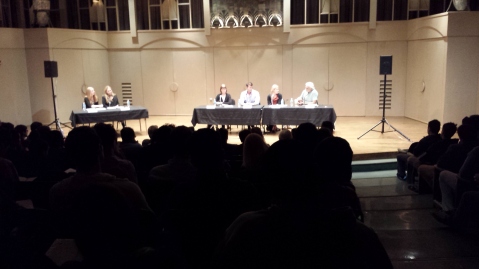 The panel was moderated by two of the professors of CSUN’s esteemed Music Industry Studies (undergrad) and Music Industry Administration (graduate) program. The panelists addressed marketing and branding in the modern music industry and answered questions regarding social media marketing, crowdfunding, digial media and streaming, concert/tour sponsorship and more.

I asked the entire panel the following question:

DAE: Over the last decade, independent artists and independent music has been on the upswing in terms of exposure. So much so that for the last 3 years independents have been nominated for over half of the non-producer GRAMMY Awards, indie artists have been booked for more music festivals than ever before, indie music has increased its share of radio airplay, indie artists have sold out headlining tours, and indie artists have earned significantly more music placements in film/TV and brand endorsement deals than previous years. Gatekeepers see the independent music community as real contenders in terms of exposure and market share. While this is all good, what do you believe are contributing factors that has influenced the indie music community to grow significantly in terms of exposure, but remain around 30% of overall record sales (especially when indies represent over half of The GRAMMY nominations (and in 2010, won about half of the categories))?

PANEL (COLLECTIVE SUMMARIZED RESPONSE): The major label machine is still very powerful and more resourceful than any one independent machine in terms of moving units domestically and internationally. While music streaming sites such as Pandora, Spotify, Rdio and Mog as well as YouTube has helped the indie artist generate exposure and fans like never before, it still doesn’t add up to compete with the noise that major labels can make [and pay for], so it’s not enough to move the same kind of major units. Also, music listeners are more likely to listen to an indie artist for FREE on music streaming sites (which helps the artist generate exposure) than they are to actually purchase the album or single. It’s less of a risk now to discover a new act or check out new music than in the past when a music listener had to purchase a ticket to a concert or buy music to really discover new music. Although exposure to independent music — facilitated primarily by digital means — is increasing rapidly, the incentive to buy music is not increasing at the same rate (as evidenced by the decline in record sales in general).

The panel’s response is consistent with my view and consultations with indie artists and labels. Basically, indie artists should view the collective impact of streaming, social media, and incremental synch opportunities as all contributing towards well needed exposure for music discovery and generating new fans. Once you’ve began to build traction and new followers, leverage live performances to generate revenue and promote new releases.

Don’t be fooled by one-off examples of independent success stories such as Macklemore & Ryan Lewis, The Lumineers and Mumford & Suns. The fact is most independent unit sales are coming from major-independent labels, not individual independent artists in the pure unsigned sense of the word.